How VoIP Works for Your Business

If your also looking for a unique customisable business voip phone system that can be tailored around your business requirement, look no further!

First a VoiP phone is a hardware or software-based phone, designed to use voice over iP (VoiP) technology to send and receive phone calls over an IP network / the internet. The handset/VoiP Phone converts audio into a digital format to be transmitted over the internet.

VoIP phone, also known as iP phone, includes features and capabilities beyond traditional phones and is the best business phone system. This is only possible because phone calls are placed over the internet instead of the legacy public switched telephone network (PSTN).

How does a VoIP phone work?
Some VoIP phones require A/C adapters for power, while others use Power over Ethernet (PoE). PoE uses an Ethernet cable instead of an A/C adapter and removes the need for separate power.

Several networking components are required to make any phone capable to use VoIP works. A VoiP Phone is assigned IP addresses through the Dynamic Host Configuration Protocol (DHCP), which automatically configures the network and the VoIP parameters. A domain name system (DNS) tracks the IP addresses to enable devices, such as IP phones, to connect to each other.

A VoIP phone requires a number of protocols to facilitate the delivery of voice communications over the internet. H.323 is the most commonly used VoIP protocol that supports audio, video and data communications across IP networks. It provides several VoIP functions, including bandwidth management and call control.

Session initiation protocol (SIP) is a signalling protocol that sets up VoIP connections and is used as an alternative to H.323. Real-Time Transport Protocol (RTP) is used to send and receive multimedia information between two devices. VoIP services use RTP and SIP or H.323 to stream multimedia content. The Simple Traversal of UDP through NAT (STUN) protocol is used on some SIP-based VoIP phones to enable communications behind network firewalls, which can sometimes block SIP and RTP packets.

Some providers use their own proprietary protocols for VoIP phones. For example, the Skinny Client Control Protocol (SCCP) is a proprietary Cisco standard for communicating with H.323 VoIP systems.

Types of VoIP phones
The two main types of iP phones are hardware-based and software-based phones. Physically, a hardware-based VoIP phone resembles a traditional hard-wired or cordless telephone. These phones include features such as a speakerphone or  microphone, a touchpad, and display hardware to show user input and caller ID. VoIP phones also feature call transfer, multiparty calling and support for multiple VoIP accounts. Some VoIP phones can transmit and receive image data during calls, so they are considered video telephones. 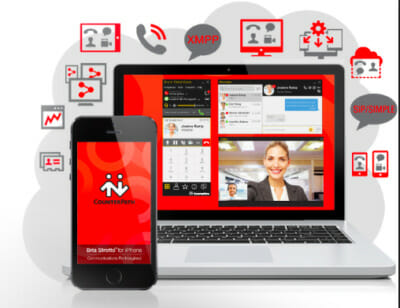 Software-based IP phones, also known as softphones, are software clients installed on a user’s computer or mobile device. The softphone user interface often resembles a phone handset, with a touchpad and caller ID display. A headset with a microphone that connects to the computer or mobile device is encouraged, or sometimes required, to make calls. Users can also make calls using their device if it includes a built-in microphone. Softphone clients offer similar capabilities to hardware-based IP phones, such as voicemail, call conferencing and call transfer. Some clients may offer additional capabilities, such as video conferencing and instant messaging, however. Traditional analog phones may also be converted into IP phones by connecting to an analog telephone adapter (ATA). Analog phones can be converted by plugging the Ethernet network jack into the ATA, which then connects to the phone. The analog phone will connect to the internet rather than the PSTN, and it will appear to the phone system as a VoIP phone.

For further information as to how a hosted phone system can provide your business with a bespoke set-up enhancing your SLA’s from being uniquely tailored to exacting requirements, call a member of the Vital Telcom team today on +44 207 048 8821.

Have questions? We have answers.